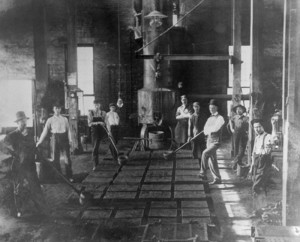 Organized in 1847 as Clarksville Foundry & Machine Shop, Clarksville Foundry is one of the oldest operating foundries in America. The company has withstood civil war, economic depression, technological changes and environmental mandates thanks to the owners’ unique vision and a strong desire to not merely survive, but to thrive. Today, the company manufactures high-quality custom castings in a variety of materials and in sizes and weights ranging from a few ounces to over 1,000 pounds.

Charles Foust, Jr., president of Clarksville Foundry since 1981, is the third generation of the Foust family to lead the company. Foust said, “Metal casting is an extremely versatile manufacturing method. The basic process has not changed much since it was pioneered around 3000 B.C. What has improved is our ability to control variables such as molding mediums, temperatures and chemistries. This allows us to consistently produce parts with very predictable finishes, dimensions and mechanical properties. The complex geometries of many modern components make them ideal candidates for casting.”

Included in the Foundry’s wide variety of work is the production and reproduction of architectural and historic castings. They work with architects, designers and contractors to develop patterns and cast decorative and structural elements.

Components cast by Clarksville Foundry can be found in downtown Nashville in the benches outside the Schermerhorn Symphony Center, stair panels inside Ryman Auditorium and decorative rail caps for the Shelby Street pedestrian bridge. The Foundry’s architectural castings can be found as far away as a recently-restored historic mill in upstate New York. Foust says he’s had friends tell him they’ve seen the Clarksville Foundry name on the manhole covers at their feet while traveling in New Orleans and even France.

Foust said, “Our ability to respond, to be competitive, and to meet rigid quality requirements leads to our selection as the provider of key components for a variety of projects throughout the country.”

Other parts cast by Clarksville Foundry are less visible, and include components that are incorporated into consumer and industrial products such as burners for cook tops, components for commercial garbage disposal equipment, pistons, hydraulic valves and pump casings. The Foundry has cast ballasts for flares used by the U.S. Navy and once cast replacement piston rings for a customer that were used in the engine room of the Delta Queen Riverboat. For nearly 18 years, Clarksville Foundry has been casting key components for several generations of commercial fuel cells, cutting-edge green technology for on-site power generation.

Except for two periods in its long history, Clarksville Foundry has operated continuously since its inception. In 1862, the Foundry, which was producing munitions for the Confederate Army, was closed by the Union Army during its occupation of Clarksville, and remained closed until 1867. To honor its roots, Clarksville Foundry is casting a Civil War-era cannon based on a period drawing, which will be finished for the upcoming Civil War Sesquicentennial in 2011.

Clarksville Foundry’s second closure occurred in 1974 when new Environmental Protection Agency (EPA) pollution regulations forced the closure of many foundry operations throughout the country. Unlike some competitors that permanently closed, Clarksville Foundry chose to upgrade its operation to comply with the new regulations. The Foundry reopened after five months and has operated continuously since.

Clarksville Foundry survived through the ages by adapting to both social and technological changes. The Foundry once manufactured the award-winning Black Hawk Patch Corn Sheller designed by Clarksville’s own A.H. Patch after the Patch Foundry closed and until the apparatus became obsolete. In its long history, the Foundry has cast products ranging from simple fireplace tools and andirons, agricultural implements, stoves, manhole covers, to the present production of critical components for the most advanced green power technology.

Technologically, the advent of computers has improved not only information related functions, but also the ability to control molding mediums, temperatures and chemistries integral to the casting process, resulting in consistent and superior quality. Technology, combined with vision, allows Clarksville Foundry to weather the times.