Clarksville Foundry Helps The Currahees Meld Past and Present 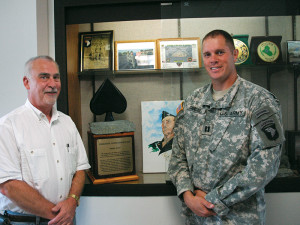 Clarksville, Tennessee — From an idea and some scrap metal, Clarksville Foundry can produce any number of functional, decorative or commemorative items for any type of customer, including manufacturers, municipalities, architects, historical foundations and groups. Like many projects, one of the Foundry’s recent castings, now referred to as the “Currahee Commander’s Cup,” began as an idea and a simple sketch. With a bit of planning, the idea was ultimately transformed into a solid reminder of the accomplishments of the 506th Infantry Regiment (The Currahees), which had returned to Fort Campbell, Kentucky from a deployment to Afghanistan. Members of the 506th returned with more than memories of a battle zone – they also had metal casings from ammunition fired while down-range and the vision of crafting an item to commemorate the recent efforts and history of the 506th.

After conceiving of the idea of a spade, the symbol of the Currahees, cast from metal directly linked to the 506th, the group hoped to find a local vendor to participate in the project. Luckily, Clarksville Foundry, one of the oldest operating foundries in America and one of Tennessee’s oldest manufacturing companies, is located near Fort Campbell. Clarksville Foundry is accustomed to creativity, and has made various custom, decorative and restoration components throughout the years. Castings have included items for an astounding variety of applications, from the mundane meter box and manhole covers that are probably the company’s most recognized product to highly complex ultra high strength castings for industrial robot components. The operation has cast architectural elements including stair treads, railing panels and fence post finials. Recently, the Foundry cast a replica of the historic 1841 Six-Pounder cannon used in the Mexican War and again in the Civil War.

When Charlie Foust, president of Clarksville Foundry, was presented with the concept, he committed himself and his resources to the project. Foust says the Currahee Commander’s Cup project represented “the opportunity for the Foundry to give a little something back to the soldiers.

After initial conversations, a sketch of the Currahee spade was converted to a digital file. The file was used to make a three-dimensional wood pattern that was used to create the mold into which the melted scrap metal was poured. Material for the spade casting included bolts from the stables in Aldbourne, England, where Currahees were housed prior to their historic jump on D-Day, along with metal gathered from more recent combat operations in Afghanistan.

With a total weight of around 80 pounds, The Commander’s Cup features a solid wood base and granite slab, topped with the 23-pound metal Currahee spade cast by Clarksville Foundry. Each component in the custom-crafted trophy bears witness to the lineage and bravery of the Regiment. The wood base was fashioned using American Black Walnut from Currahee Mountain and pine planks from barracks at Camp Toccoa, the Georgia birthplace of the Currahees. Georgia granite, also from Currahee Mountain, forms a foundation for the spade cast from metal with direct connections to the Currahees. Even the plaque on the front was forged using brass accoutrements donated by past and present Currahees. 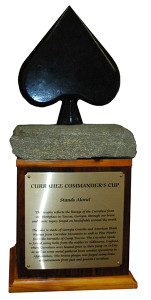 Says Captain Edwin Churchill, “The wood and stone of old joined the metal of the new to meld the past and present history together.” Churchill, skilled in woodworking and trained in engineering, was instrumental in overseeing the successful design and completion of the Currahee Commander’s Cup. The intent behind the Commander’s Cup was to memorialize the successes of the 506th and to provide a tangible reward for the victors in the morale-building direct competition between battalions. In its debut, the Currahee Commander’s Cup was awarded to the winner of a series of sporting events held during Currahee Rendezvous 2009. Events included soccer matches, power lifting competitions, and combative events before coming down to the culminating tug-of-war between the 801st and 1-506th units. The 801st claimed the top honor and earned the first plaque on the trophy and bragging rights until the winner of the next bi-annual event is crowned.

The Currahee Commander’s Cup now sits proudly in the Headquarters of the 506th Infantry Regiment 4th Brigade Combat Team, Fort Campbell, Kentucky, aside historic artifacts and memorabilia illustrating the colorful heroics of the Currahees – including the Commander’s Walking Stick and portraits of Robert F. Sink and the “Sink Grail” commemorating WWII and Viet Nam. The Currahee Commander’s Cup is a solid reminder of teamwork – not only of the members of the 506th, but that of the individual units which compete for the honor of the trophy and the partnership of private business and soldier patriots.