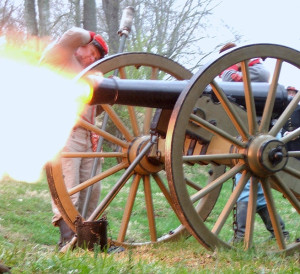 History was made on the Montgomery County Courthouse lawn Tuesday when a cannon was fired for the first time ever from the courthouse grounds.

Additionally, the cannon used — a replica of an 1841 field howitzer cast by the Clarksville Foundry in February 2009 — was the first cannon made in the city since the Civil War. The cannon’s carriage is on long-term, permanent loan from Shiloh National Military Park, where the Battle of Shiloh began 148 years ago to the day.

It was fitting that a day steeped in history was the first local event to commemorate the 150th anniversary of the Civil War and marked the beginnings of CW150 Commission, which is planning events to capitalize on war’s anniversary that will be celebrated from 2011 through 2015.

“We have many Civil War stories,” County Mayor Carolyn Bowers told the gathering of about 100 people who came to witness the event. “It is important to share these stories.”

She added “our opportunity is now” to organize the local Civil War history for the many tourists expected to visit battlefields and historic sites across the nation. Frank Lott, who headed up the Civil War 150 Steering Commission that brought the effort to Tuesday’s fruition, agreed.

“We must have our Civil War story and events ready well ahead of the 2011 travel season,” he said. “We need to be prepared to get that economic impact.”

A major part of Clarksville’s story is Fort Defiance, a Civil War outpost that overlooks the Cumberland and Red rivers and was occupied by both Confederate and Union soldiers. Work is ongoing at the site to build an interpretive center to chronicle the local chapter in the Civil War. It will be the final home of the replica cannon fired Tuesday.

The work at Fort Defiance is expected to be finished next year.

During his remarks, Clarksville Mayor Johnny Piper recalled the surrender of Fort Defiance to Union troops via the raising of a white flag — and without the firing of a single shot.

“Never again shall we surrender in Clarksville, Tenn.,” Piper proclaimed.

“We fired one time today, but it was for a lot of reasons,” said Battery member William Ruble. “This is in memory of all who have served from Montgomery County. Not just in the Civil War but all those ‘Faces of Valor’ hanging inside the courthouse.”

More Coverage of the Cannon