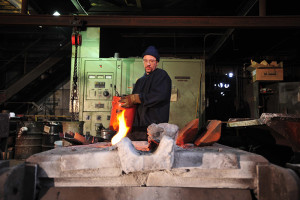 CLARKSVILLE, Tenn. — Clarksville Foundry is featured in a two-hour National Geographic Channel special program “Secret Weapon of the Confederacy” premiering Thursday, Sept. 15 at 8 pm CT. The show explores the mystery of the sinking of the Confederate submarine H. L. Hunley.

“Secret Weapon of the Confederacy” brought a national film production crew to Clarksville Foundry’s main manufacturing building on Red River Street for two days in January 2010. The show includes a segment filmed at the Foundry, including an onscreen appearance by furnace operator Larry Hale and commentary by plant manager Larry Rye.

Interestingly, Clarksville Foundry’s origins pre-date the Civil War, and the local company cast munitions for the Confederate States of America.

The H.L. Hunley was the first submarine to sink an enemy ship when it took down the USS Housatonic in Charleston Harbor on Feb. 17, 1864. After a successful torpedo hit, the Hunley signaled its return to the Confederate battery on Sullivan’s Island, but mysteriously disappeared before reaching its destination. The Hunley’s remains were discovered in 1995 in the open waters of the Atlantic Ocean, just over 3.5 nautical miles from Sullivan’s Island outside the entrance to Charleston Harbor. The wreckage was raised from the site and transported by barge to the Warren Lasch Conservation Center at the former Charleston Navy Yard for extensive analysis and preservation in August 2000. 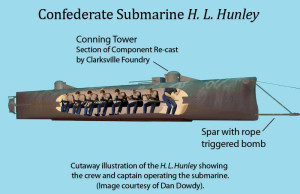 In an attempt to unravel the mystery of what happened to the Hunley, a part of the submarine was reproduced by Clarksville Foundry, and in a laboratory setting was fired upon with period weapons to determine if gun shots from the USS Housatonic could have caused the damage seen on the wreckage.

In late 2009, Clarksville Foundry was hired by Half Yard Productions, based in Bethesda, Md., to recreate a section of one of the Hunley’s conning towers for the project.

According to Clarksville Foundry president Charles Foust Jr., “It was critical that the new cast iron section match the chemical composition of the Hunley’s original plating as closely as possible.”

To achieve this accuracy, the Foundry relied upon modern technology and used an arc-emission spectrometer to analyze a fragment of a Civil War era cannon ball to determine its composition. Clarksville Foundry vice president Matthew Padgett commented, “The castings of the Civil War period were not refined with alloys as they are today, so matching the composition of the cannon fragment required taking a step back in time and duplicating the technology in existence 150 years ago.”

The historic iron “recipe” was heated to a liquid state in the foundry’s 400 kilowatt Inductotherm electric furnace. At temperatures approaching 3,000 degrees Fahrenheit, the bright glow of the molten material is accompanied by an impressive shower of sparks as it is poured into the sand mold. After pouring, the mold remains undisturbed for several hours as the liquid metal cools and solidifies. The process of casting the replica of the conning tower section and results of the testing will be revealed in the “Secret Weapon of the Confederacy” airing on NGC.

Padgett observed, “The project was a learning experience all around. The guys got to work on a project using old-time production techniques and see firsthand the differences that modern production methods, including the addition of alloys, can make in the properties of castings.”

Foust added, “This was an exciting opportunity for Clarksville Foundry. We got to help solve a mystery from over a century ago, and it’s not every day that we have a crew from an organization with the status of National Geographic Channel in the building filming for a television show.”

Padgett recalls that it took just a couple of months from the initial contact from the production company to shipment of the cast part to a lab in Maryland. “The long part has been waiting for the program to air to see if any of our own theories of what happened to the Hunley are confirmed.”

For more information on Secret Weapon of the Confederacy, visit www.natgeotv.com.