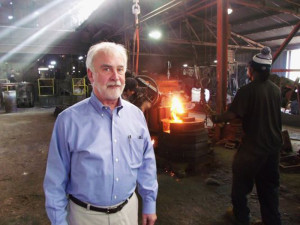 Industry in this country has changed significantly – whether that’s through huge leaps in technology, or the fluctuating demands of customers.

Question: Let’s begin with some background – how did you come to this particular industry?

Foust: This is a family business. I’m actually third generation. My grandfather acquired it in 1912, so it’s been in my family a little over 100 years. He came to Clarksville from North Carolina, he had a degree in chemistry from the University of North Carolina. He actually came as a superintendent of the Red River Iron Company, which is defunct now. This foundry was owned by Red River Iron, and my grandfather was superintendent for them, then he acquired it from them.

I got a degree in mechanical engineering from the University of Tennessee in 1978, and had no idea what I was in for. The business was kind of on life support back then. My father and two of his brothers owned it, and my father was the only one who had children who expressed even the least bit of interest in coming back to the business – and as it turns out I was the only one.

One of my father’s brothers had no children, the other had children who were doing other things, so their goal was to extract as much from the business as possible before they left. So it was kind of in a rough situation when I arrived. They had a product line that was municipal castings, which you’ve probably seen on meter boxes, manhole covers, things like that all over the country. That was a staple for this business for many, many years.

But at that point in time, the late 1970s, foreign competition was becoming an issue, and environmental regulations were coming into play in the United States, foundries were dropping like flies. In the 20-year period around the late ’70s, 70 to 80 percent of the U.S. foundries closed. We had to reinvent ourselves, reinvent antiquated processes, we had a product line that was going down the tubes with a recession going on. We had a number of challenges.

We persevered and managed to turn this into a pretty good business.

Question: You’ve touched on a few interesting points there, but let’s start with the family aspect. You were the only one of your generation with any interest in the business, what drew you to it?

Foust: I kind of grew up around it – more in the metal casting side than the machining and welding. I’ve always liked to do things with my hands. It’s really gratifying to be able to make something and say, “I created that”, to put your hand on it and it has some function. It just seemed like something I’d enjoy. Manufacturing is fun.

Question: You mentioned a few of the changes in the industry that were taking place around the late 1970s – what else has changed since then that you’ve had to adapt to?

Foust: The industry as a whole has really shrunk. Much of the metal casting and production is done outside of the United States, because places like China and India don’t have the labor challenges, don’t have the environmental and health and safety regulations that we do. As a result they can be very competitive. We’ve carved out a niche that’s somewhat immune to imports. We can do very quick lead times, high-quality stuff and low volumes. So even in the U.S., there’s not a lot of competition for our niche. It’s also somewhat more insensitive to pricing. If a guy wants 10 of something in two weeks, you’re not going to get it off-shore. We’re able to provide that.

Question: So, within this niche you’ve carved for yourself in providing bespoke products, what are you finding people are asking for?

Foust: We make mostly components for other people’s products. Casting is an extremely versatile means of production. You can produce shapes that you’re otherwise unable to.

Question: Did forging a niche for yourself, and surviving where others have fallen by the wayside take a significant level of research and development?

Foust: Not really, it’s more fine-tuning your process to be able to do that. We do a lot of different materials. When people think of cast iron they think of benches and fireplaces – pretty unsexy stuff. But there’s a lot of other materials that have high-tensile strengths, mechanical properties, and you get those by adding alloys, tricks with the metallurgy that gives it the ability to withstand high temperatures, abrasive conditions, and you can tailor the material to the application.

Question: You maintain a significant local industrial presence – do you find your customers are primarily from the local area?

Foust: We almost have no customers locally. With the exception of maybe working with a few local artists, but that’s more of something that I choose to do because I enjoy working with artists. The customers primarily come from the eastern half of the U.S., because cast iron is heavy and costs a lot to ship it.

Question: There’s an interesting dichotomy there – you’re a local industry with little local custom. What keeps you in Clarksville, rather than moving closer to the primary sources of business?

Foust: I wouldn’t even consider taking it anywhere else. New foundries are not being built in the U.S. It’s a capital-intensive industry, there’s a lot of equipment. If I was breaking ground on a new foundry somewhere I’d have to get all kinds of permits, jump through a lot of hoops, and it probably wouldn’t even make sense to do it in the U.S. This is my birthright sort of thing, and I’m happy to be here.

Question: And you seem to be nurturing that birthright into a new age. How do you go about approaching the challenges involved with that?

Foust: Mainly perseverance. In the 1980s there were so many challenges. I had an engineering degree, so I had a lot of other opportunities. But having made that choice, I guess stubborness had a lot to do with it.

Question: You’ve spoken a little on the challenges that faced the company when you came to it, but what are the current challenges?

Foust: I guess continuing to bring in new customers – that’s always a challenge. We’ve had a good year, the backlog has dwindled now a little bit, but that’s not unusual at the end of the year. You’ve always got to be thinking about “What are we doing next month, what are we doing the month after that?”, because we make things to order, ship them, hopefully get paid for them 30 days later. We don’t have inventory of our products, or products of our own per se. So just keeping the work coming in. We’ve put a lot of effort into our website, and that’s been very effective at bringing in customers. We’ve got one – Detroit Stoker – who were faced with some of their suppliers closing down, family businesses with no one to take over. So we’ve resourced some of their product.

Question: It’s interesting that you’ve mentioned that other family companies are closing because there’s no one left to take them over. Do you personally find it difficult to attract new talent into the industry?

Foust: Yeah, there are not many foundry training opportunities. In academics, University of Alabama has some foundry training in the engineering program, I think Tennessee Tech does too – there’s a lot of new stuff out there.

The metal casting process is ancient, it goes back to Babylon. The process hasn’t changed a lot. You’re still making a cavity in dirt or sand, we’ve got better ways of making the cavities and molds, of melting the metal, of controlling things, chemistry. So the process is old, but the technology is much improved. On the forefront, we’re kind of on the cutting edge of computer modeling. You can actually put in a model of a casting in the computer and simulate how it solidifies from a liquid. By doing that you can optimize the process, eliminate the defects that you would have previously only found through trial and error.

The other thing that’s coming up the pike is 3D printing. When I make a casting I have to start with a pattern, and that pattern is packed in sand, and when it’s pulled out it leaves a cavity in the sand. Pattern construction has largely been a very high-skilled area. Carpenters are on one end, furniture makers on the top end, pattern-makers are a notch above furniture makers. It’s high-skilled, with lots of things to think about … very low tolerances, the metal shrinks as it cools, and you’ve got to have angles on every surface in order to get it out. But 3D printing could really change things a lot.

The pattern maker’s skill, though, I don’t think will ever be replaced. There’s not many of them, but they’re out there.

Question: There’s certainly an impression that your business straddles between an artform and an industry.

Foust: Very much so, particularly the niche we’re in. The automated foundries might have a repertoire of 50 parts, and that’s all you can get from them. If you go in our shop, any two days that you pick you’ll never see the same product. We’ve always got different stuff going on, which has its own set of challenges, because once you’ve figured it out, the job’s done and you move on to the next.

Foust: It’s just fun to make stuff. Always something new going on, and when I get up I’m always looking forward to it. I think that’s a real gift.

More information on Clarksville Foundry can be found at www.clarksvillefoundry.com.