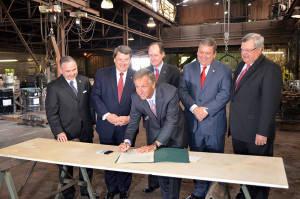 When the landmark Workers Comp Reform Act of 2013 landed on Tennessee Governor Bill Haslam’s desk for signature in May, he wanted to sign it at an iconic Tennessee business … a business that had survived the test of time and had come out on top.

The Clarksville Foundry fit the bill. The foundry, in business for more than 165 years, is one of the oldest operating foundries in the U.S. and its rich history is steeped in tradition and family values. It has survived the Civil War, Great Depression and technological and environmental mandates, and for the past 100 years the Foust family has been at the helm.

“The Foundry has been in existence since 1847 and to my knowledge we have never been honored with a visit by a sitting governor,” said Foust with a smile. “That is unless Governor Andrew Johnson slipped in the back door during the 1860’s.” 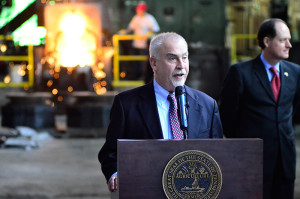 Warmly greeting the foundry guests on May 7, the day of the bill signing, Foust remarked that “having all of you here as our guests is personally very gratifying. As we wrap up the Foundry’s 100th year of Foust family ownership, and embark on our second 100 years, I am privileged to share the day, and the foundry, with you.”

He continued, thanking state legislators, local officials, colleagues and friends for visiting the foundry, but Foust reserved a special thank you for “the employees who have helped us remain a successful Tennessee business for over 165 years.”

Foust, current Clarksville Area Chamber of Commerce president, also sits on the National Federation of Independent Business Leadership Council. The council had a hand in crafting the Workers’ Comp Reform Act of 2013.

Jim Brown, state director of NFIB said that Foust “has been very helpful in a lot of small business efforts in the state of Tennessee, so the Clarksville Foundry was a perfect place to sign this important legislation.”

According to Foust, the Workers’ Comp Reform Act is important legislation for Tennessee small-business owners and employees alike.

With molten iron being poured behind him, Foust explained that “today’s workers’ comp system is highly subjective, unpredictable and too often contentious. For business, this means higher legal and insurance expenses, which translates into high prices for consumers. For injured employees, this often means delays in claims payments and medical treatment.” 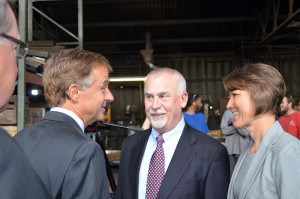 Gov. Bill Haslam stops to speak with Clarksville Foundry President Charles Foust, Jr. and his wife Kris after signing the Workers’ Comp Reform Act of 2013 at the Foundry. The foundry has been run by the Foust Family for a little over 100 years. Photo by: Gary Norris, DBS & Associates.

“Governor Haslam, the state legislators and the business leaders here before you recognized this,” emphasized Foust. “So, they went to work in a methodical, business-like way, meeting with interested parties across the state.”

“Rather than rush a bill piecemeal through the legislature,” he continued, “these leaders asked a lot of questions, gathered a lot of feedback and proposed some great solutions that eliminate systemic subjectivity and friction.”

According to a press release from Haslam’s office, workers’ compensation premium rates for employers in Tennessee are higher than the national average and higher than all of Tennessee’s bordering states, and the state is one of only two that adjudicated workers’ compensation claims in the trial courts, often delaying benefits to employees and producing inconsistent results.

“We chose to come here today to sign this bill because this business has been here for 165 years and it’s been in [Foust’s] family for a little over 100 years,” Haslam said. “We want Tennessee to be a place where people make things, and to do that, we have to create the right business environment.”