1847: H.P. Dorris opens the first foundry in Montgomery County, Tennessee on Commerce Street near downtown Clarksville at the site of the original town spring and operates under the name of Clarksville Foundry & Machine Shop.

A purchase order for munitions from the Confederate States to Whitfield, Bradley & Co., predecessor to present Clarksville Foundry

1861: Whitfield, Bradley & Co. is used as a munitions factory for the Confederacy during the War Between the States.

1862: Foundry operations cease upon the capture of Clarksville by the Union Army.

1890s: An era of Modernization

1892: Wesley Drane purchases an interest and the firm operates as Whitfield, Drane & Co. 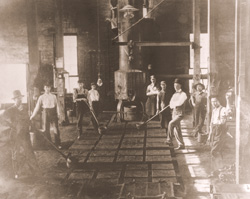 Clarksville Foundry in the Early 1900s

1907: Thomas (T.B.) Foust leaves the employ of Mr. R.J. Reynolds in North Carolina, relocates to Clarksville and becomes a chemist and later superintendent for The Red River Furnace Company. He also consults for blast furnaces in the area to optimize their processes.

1910: Ground Hog Plow & Foundry sells the plow patents to W.J. Oliver of Knoxville, TN and changes the name of the corporation to Drane Foundry & Supply Company, denoting their entrance into the supply business.

T.B. Foust served as company president until his death in 1966.

1915: Experimentation begins with bentonite, a colloidal clay of unusually high green and dry strength. The first low-frequency induction furnace for nonferrous melting is installed in Philadelphia.*

1922: T.B. Foust buys Drane’s land and buildings on Commerce Street at auction. This is the site and operation established by H.P. Dorris in 1847.

1940s:T.B. Foust develops and introduces a new product line of mass-produced municipal castings that are sold nationally and are still visible in cities across the U.S. The product line becomes a hallmark for Clarksville Foundry for the next 40 years.

1940 – 1945: W.W. II causes foundry business to soar. The foundries at both locations operate in response to the war effort and for a time, over 100 men are employed.

1943: Ductile iron is invented and opens the door to many new applications. It provides flexibility and strength previously unavailable in an iron casting.*

1946: The Commerce Street foundry ceases operation, but that location continues as the site of machine, welding, and blacksmith shops.

1949:A U.S. patent on ductile iron production through magnesium treatment is issued.*

1954: With all metal casting being done at the Red River Street location, the old frame building proves inadequate. It is torn down, leaving the furnace standing, and a metal building is erected around the furnace.

1955: The A.H. Patch factory shuts down and Clarksville Foundry takes over production of the world famous line of corn shellers, grist mills and related products. The original patterns are still in storage.

1966: T.B. Foust passes away on May 27 after an illness of 3 years, and is succeeded as president by George (G.T.) Foust, with Charles and Tom, Jr. remaining as vice presidents.

1970s: New air pollution laws force changes in the industry, resulting in temporary and some permanent closures of operations. 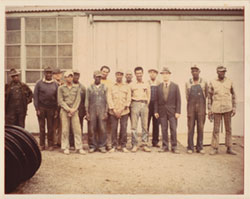 1974: (January) Decreasing markets for its line of municipal castings due to a poor economy, increasing foreign competition, and the advent of plastic and concrete products, along with the implementation of sweeping new air pollution regulations by the federal government seem to mark the death knell. Clarksville Foundry’s casting operation is closed for five months, marking the first time since 1847 (except for the Civil War) that a foundry has not operated in Clarksville. Instead of permanently closing its doors as many competitors were forced to do, Clarksville Foundry makes bold moves to bring the operation within new EPA guidelines.

1974: (June) Clarksville foundry reopens with permission to use its old cupola furnace until a new one that meets pollution regulations can be installed.

1977: George Foust retires in September and is succeeded by Charles Foust, Sr. as president.

1978: Charles Foust, Jr. graduates at the top of his class in mechanical engineering from the University of Tennessee and returns to Clarksville to work in the family business. He initiates programs to modernize processes, upgrade aging equipment, and seek new markets.

1981: Charles Foust, Jr. becomes company president and begins to initiate technology upgrades and shifts in product emphasis. His father remains active in all phases of the business.

1987: Clarksville Foundry is entered on the National Register of Historic Places.

1988: To continue improving efficiencies of operations, Clarksville Foundry consolidates operations to a single site. Construction of a new main office and technology upgrades take place. The historic Commerce Street properties are sold to the City of Clarksville and become the site of new city office buildings.

1994: In recognition of his business savvy during adverse situations that resulted in astounding turnaround growth and prosperity for Clarksville Foundry, Charles Foust, Jr. is named Tennessee Small Business Person of the Year.

2005: Clarksville Foundry participates with three other U.S.-based foundries to cast "Rosette Bobbin," the winner of the 2005-06 Samuel B. Barker Outdoor Sculpture Competition held at University of Alabama at Birmingham. The sculpture resides outside the 1901 Spencer Honors House (at UAB), formerly the Second Presbyterian Church, where Martin Luther King, Jr. once spoke during the civil rights era. A full-size replica resides outside Clarksville Foundry.

2010: Using historic drawings, the Foundry creates a pattern and casts a reproduction 1841 ‘six-pounder’ cannon. The completed cannon, temporarily located at Clarksville-Montgomery County Courthouse, is fired to kick off the Civil War Sesquicentennial. The video "From Molten Metal to Cool Castings," documenting the cannon project to illustrate the casting process, is also completed

2012: Clarksville Foundry celebrates 100 years as a family owned business the same year that Charlie Foust, Jr. will step in as chairman of the Clarksville Area Chamber of Commerce.

2012: Clarksville Foundry becomes a Clarksville-Montgomery County Green Certified business after replacing older equipment with energy efficient models for the casting process and instituting practices to recycle and reduce waste in its administrative functions.

2013: Clarksville Foundry is chosen by Tennessee Gov. Bill Haslam as the site for the ceremonial signing of the landmark Workers’ Comp Reform Act of 2013. The foundry was chosen because of their longstanding history of success and dedication to business growth in Tennessee.